The Length of a Calendar Day

Just for the record, I don't have any New Years Resolutions. I have minor modifications to my behavior that I intended to implement coincidentally on January 1st. That's totally different. Right? :)

But just how long *is* January 1st? While down visiting my friends and family over the holidays, this question was posed to me.

Now of course, the answer seems completely obvious. 24 hours. Right? Some might argue the day isn't quite 24 hours, given various rotation periods, or only considering hours of "daylight" etc. But in general, the length of day being defined by the Earth's rotational period is 24 hours. But that wasn't the topic of discussion, rather, this one referred specifically to timezones.

That is, given that different parts of the planet can register the calendar being different days at the same time, how long does *somewhere* on the planet register a specific day?

Take January 1st for instance. I celebrated New Years at 12:00 AM January 1st, Local time. My particular time zone is UTC-4 (aka GMT-4), so by the time it was January 1st for me, it was already January 1st for more than half the planet. So how long, in hours, did January 1st last from the first moment somewhere on Earth registered it, until the last place on Earth clicked over to January 2nd?

Let's imagine we break the Earth symmetrically by time zone: 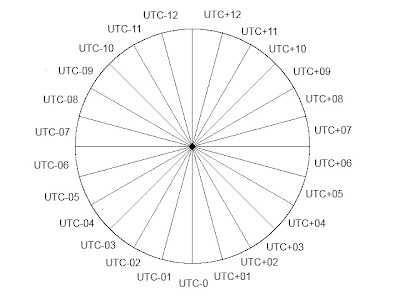 In this simplified model, the day would first "dawn" in UTC+12. It would turn 12:00 am January 1st, 2011 first in UTC+12, then 1 hour later progressively across the planet. The interesting thing is what happens when you go the *other* direction, that is directly from UTC+12 to UTC-12. This is called the International Date Line and works like so, if you cross it traveling west, then the time remains the same but you increment a day to the date. If you cross it going east, the time still remains the same, but the date decrements a day. Thus, If it's 12:00 AM on January 1st in UTC+12, then it's 12:00 AM on December 31st in UTC-12. Using this, we can extrapolate a simple chart like so: 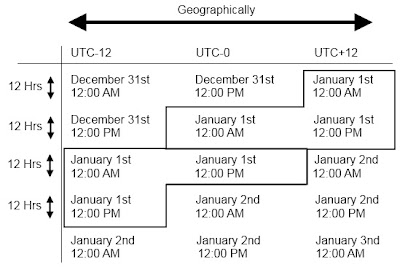 With this model, UTC+12 would be the first place it becomes January 1st, and it would last for 24 hours, the entire time it would be December 31st in UTC-12. Once January 1st in UTC+12 clicks over the January 2nd, the International Date Line tells us that UTC+12 is now January 1st, which it has another 24 hours as Jaunary 1st. The various time zones in between would have their day in between the two extremes, but we don't need to consider the overlapping periods to answer this question. Thus, in this sense it would be January 1st somewhere on the planet for a total time range of 48 hours. Kinda neat, huh?

The simplified model postulated above helps us to think about the problem, but isn't quite the solution. It implies that there are 24 equally distributed time zones (not including UTC), which isn't quite the case.

Granted, there are timezones that are not offset on the hour, UTC -3:30 (Newfoundland Time) for example. But these don't matter for this analysis, since they are still within the UTC+12 and UTC-12 extremes.

The problem is that UTC+/- 12 aren't necessarily the extremes. In fact, there are two additional time zones that need to be considered, UTC+13 and UTC+14. So indeed, UTC+14, rather then UTC+12, is the first place the day clicks over.

What does this imply for our analysis? Well, think about it this way, we've started that there's a total 48 hour window between the period the day dawns in UTC+12, then ticks over the next day in UTC-12.

But, by the time the day clicks over in UTC+12, it's already been that day in UTC+14 for two hours now. And so, we must add on these two hours to the 48 window for a grand total of 50 hours being the length of a calendar day.

Indeed! Quite a bit more then the usual 24. However, there's still one other aspect we haven't considered yet: Daylight savings time.

The analysis presented above assumes that all timezones (by which I mean UTC offsets) remains the same throughout the year. This is of course not true. I'm currently in my local timezone of UTC-4, however, for a number of months throughout the year while DST is in effect, I'll in fact be UTC-3 instead.

How does this affect our analysis? Let's consider what this would do at the extremes we've established:

This might not seem to affect our counts at all, and in this case, you'd be correct. We might be gaining an hour moving to UTC+15, but we're losing an hour off the other end, keeping the count to our previous count of 50 hours.

The interesting thing is that, while DST offsets us by an hour, not all places observe it. This creates a few interesting scenarios.

Likewise, the opposite could be true. Imagine that there is a place in UTC+14 which does not observe daylight savings time, and that there were no places in UTC-12 which did not. This would cause us to run from UTC-11 to UTC+14 simultaneously, resulting in a 49-hour day.

My research so far however indicates that the only place I'm aware of using UTC+14, a country called Kiribati, uses UTC+14 all year round, so in fact never offsets to UTC+15. So unless I'm incorrect on that, or it changes in the future, we can rule out a 51-hour day.

In addition, according to Wikipedia with regards to UTC-12, there are in fact no human habitations in this timezone. Instead, the timezone is nautical only, observed by ocean ships which happen to be crossing through it. And I highly doubt that they bother to observe DST, or even if some did, that all would.

Thus, year round we likely have a UTC-12, which is the last part of the planet to observe a calendar day.

So even though DST could affect our analysis of a calendar-day length by an hour, due to the decisions of local (or non-existent) jurisdictions, they do not. At least for now, the length of calendar day observance remains at 50 hours, year round, regardless of local DST offsets.

To wrap up this post, a short discussion on why we use timezones at all. If you are Canadian (or even interested in the subject at all) you are likely familiar with the Sir Sandford Fleming Heritage Minute. Fleming was an railway engineer, who was fed up by the ridiculous "minute" offsets of various timezones between cities. This was because each various location liked to have noon the time when the sun was "overhead", making the setting of time as one traveled by rail very inconvenient.

So Fleming came up with a different idea: Standardized time. Dividing the world into roughly 24 equal sizes areas, it was now far, far easier to communicate times across the world and have them be relevant and make sense.

Although it took him some time to get it widely accepted and adopted, Fleming's invention of Standard time was nothing short of genius. It was likely as important as the railway and telegraph themselves in modernizing the industrialized world.

But Fleming only reduced the number of timezones. He shrunk the number back by a pretty significant amount, but didn't eliminate them completely. Why?

To me, the elimination of timezones would seem to be the next logical step. As a computer programmer, I can tell you that writing and dealing with software that needs to operate in different timezones can be challenging. You always need to be conscious of what time you are working with, is it local or UTC, how much does it need to be offset by, is it daylight savings time or not, etc. Doing comparisons can also be tricky, and since various programmers do things in different ways, sometimes cooperating between different programs and programmers just complicates things more.

But what real difference would that make? Sunrise would just "happen" to be at 10 am instead of 6 am, but so what? I dare say that if such a system were to be adopted, it would probably only take a generation or so, perhaps less, for everyone to become accustomed to it. I'm sure our biological clocks would adjust, same as they did for Standard time. You would still have to do some mental calculation offsets on occasion for specific things, but probably not as many.

Just look at the transition of most countries (US not withstanding) to adopt Metric over Imperial measurements. I, for one, certainly can't think or estimate in miles or quartz. I'm not too bad with inches and feet, but only because when I used to help my Dad with upholstery or construction, he made sure I read the measuring tape in inches. I do know my own height in both centimeters and mass in kilograms, and generally get pretty confused dealing with Fahrenheit.

But those are just my personal preferences. Getting international cooperation on such a scheme would prove very difficult, just look at the opposition Mr. Fleming ran into. And countries are far less willing to adopt such things even today.

Nevertheless, I think it's a neat idea with a number of benefits, even if its never actually adopted. What about you? What might be some other pros to such an approach? What might be the cons and downsides of it?

Leave your thoughts and opinions in the comments and below, and feel free to correct me on any of my calculations if you feel I made a mistake in my calculations on the length of a calendar day.