Upgrading to 10.04? Might need to fix your display settings.

Call me an "early adopter", but I love playing with bleeding edge tech (when I have the cash :) even though it might cause a few buggy issues.

As such I was excited when Ubuntu 10.04 LTS was released just over a week ago. After installing the latest Karmic upgrades, I was presented with a friendly request to upgrade to 10.04 and decided to take it. And as always for Linux, the monetary cost isn't something I need to worry about :).

Installing over my Karmic install was fairly painless, but slow. It had to download about 2.5GB, which surprised me since the install CD's themselves are usually only around 700 MB. The download proceeded smoothly and after a few hours the install began. Again, there wasn't a heck of lot of user interaction on my part, just a few dialogs I needed to answer. After an hour or two more, I was prompted for a reboot to continue.

Not sure I was quite prepared for what came next. As you might have seen before in my blog, I have a rather customized Gnome desktop, including a custom Xorg.conf file for extended displays. Upon rebooting, my entire desktop was...rather messed up. It's hard to describe, but the desktop seemed to be flipped 180 degrees, and the icons themselves were inverted. The entire desktop was also completely unresponsive. I couldn't click anything, nor would the keyboard or any of my short cuts respond! 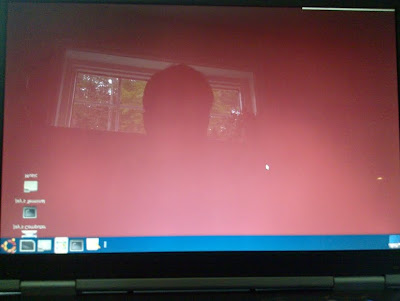 Very strange, though I had an inkling it had to with my various desktop modifications. A close up on the Gnome menu: 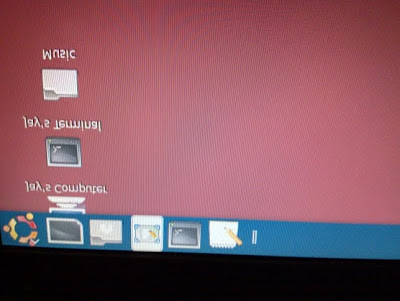 Strange looking, hmmm? That's what I thought. However, this isn't the first time I've totally borked my Gnome desktop, so I knew what I had to do to reset it. I restarted and used grub to enter recovery mode which allowed me to boot into a command line interface (Tip: You can also try CTRL-ALT-F1 to get to a command line).

I then gained root access with a sudo bash command, and made a backup folder. From there, a copied the following four folders: .gnome2, .gconf, .gconfd and .gnome_private into the backup folder (Tip: You can use cp -r to move directories and their contents recursively).

I then used rm -rf to remove each of the folders (Don't do this as root from your / directory lest you delete your entire file system!)

Upon rebooting, Ubuntu decided it needed to do a disk check. Considering my last few hard reboots, this was expected: 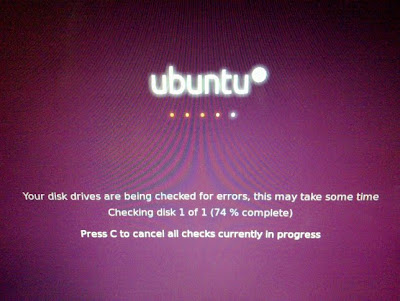 After it was finished (~20 minutes), I booted into Gnome. My customized desktop was gone *but* everything was still oddly "inverted": 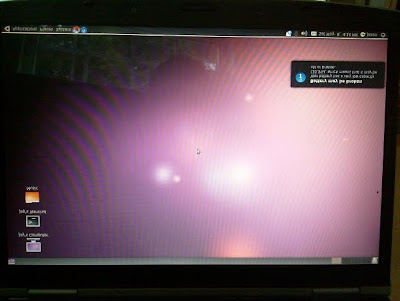 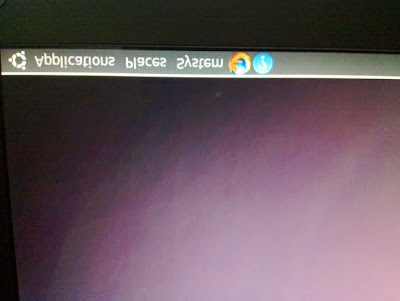 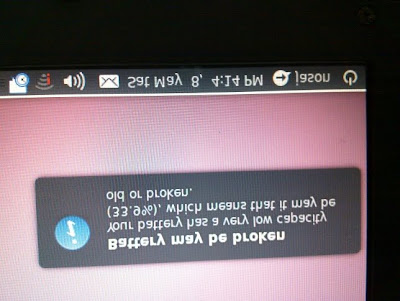 Still borked, apparently. The only other thing I could think of that might be causing such an odd issue is my custom Xorg.conf file, as these haven't officially been in Ubuntu for a while.

So I booted back into the terminal and removed it. And voila! I was presented with: 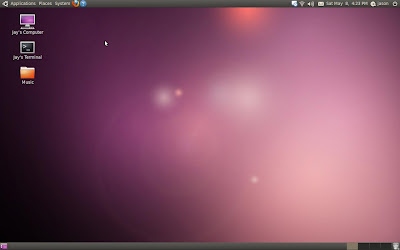 As Bender would say, we're back baby! I then tried restoring my old Gnome settings from the backup (with the removed Xorg.conf, after backing up the current settings first), though this caused my Gnome to freeze on restart, so I put the old desktop back. Still, if you run into a similar issue, I recommend simply trying to remove your Xorg.conf first before resetting Gnome. I'll spend some time with the new Gnome theme before I decide how I want to customize it. So far it's pretty spiffy, if odd looking, not sure if I'll get used to the window controls being on the left side of the screen! No problems with my wi-fi, connected with no issues. My sound isn't working, though I have yet to figure out why, and I'll need to figure out how to bring back my extended display, such is the price you occasionally pay for trying out the latest and greatest. Still, the OS itself seems solid enough though (blazing fast on this outdated hardware!), and I look forward to playing with it more. Hope this post gives a hand to any others who run into the odd display issue I did!
Posted by Jay at 4:39 PM No comments: